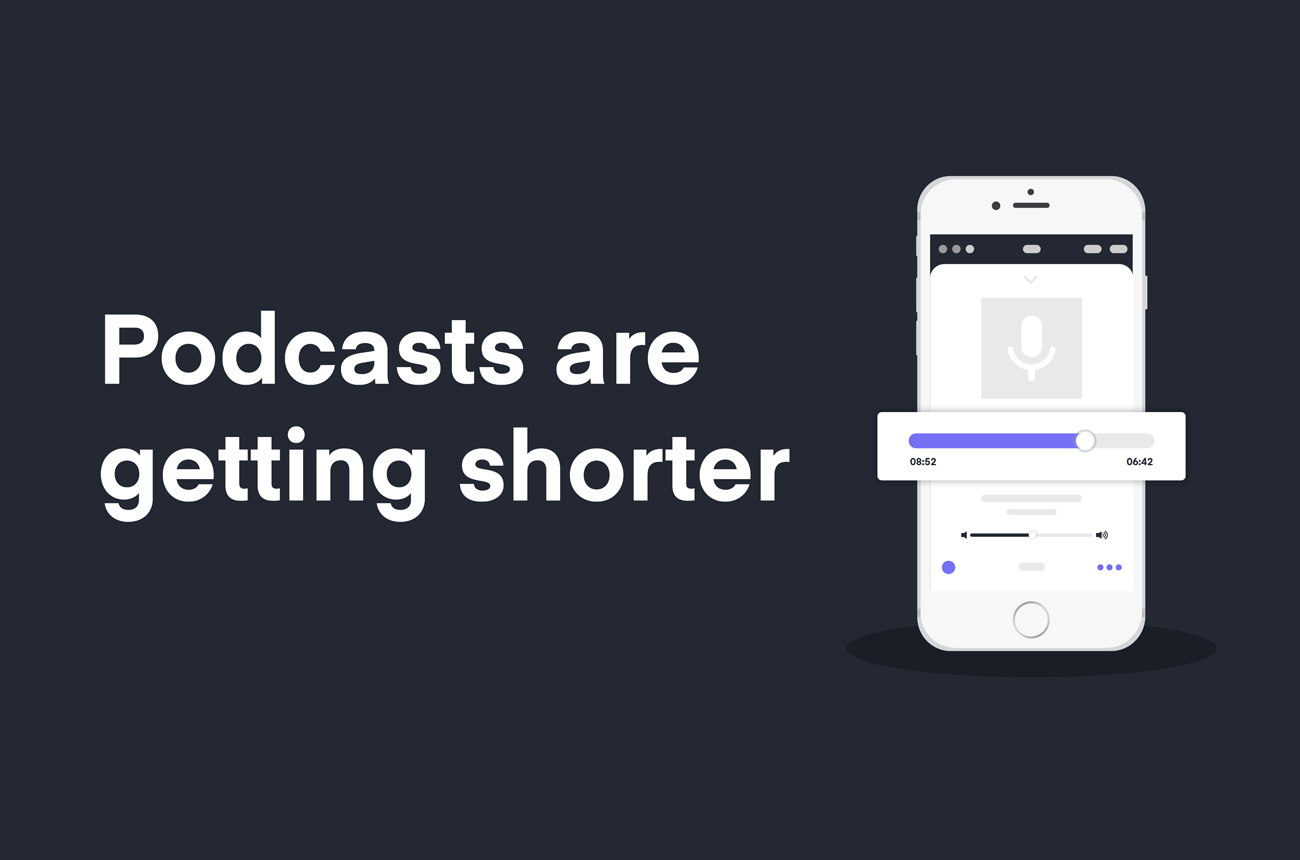 Podcasts Are Getting Shorter

It isn’t your imagination. Over the last five years, newly launched podcasts have been getting shorter.

The length of an episode can vary widely from podcast to podcast, from the five-minute hourly NPR News Now to Dan Carlin’s Hardcore History, whose episode average is three hours and 39 minutes. We wanted to see if there were any discernible patterns in the length of podcasts that are out on the market. How long are most podcasts? And what is the trend in episode length?

To answer these questions, we scraped the data from the podcast RSS feeds for all 549 podcasts that appeared in the Apple Podcasts Top 200 list between March 6th-May 11th, 2019.

These 549 podcasts have a total of 55,560 episodes in their feeds. Charting them out by length (rounded to the closest minute), we can see there are a few groupings around how long these episodes usually are. For instance, we see a spike in shows that clock in around one hour and again at two hours. There are smaller spikes at the half-hour and one-and-a-half-hour lengths. That shows us that a lot of podcasts are probably still following habits from radio, where content needs to be arranged in set blocks of time for the broadcast schedule (in some cases these podcasts actually are repurposed radio content).

We also see strong spikes at the two and five-minute lengths. A lot of these are quick updates — a teaser to introduce a new podcast that the network is releasing, for example. However, some podcasts put out regular episodes of this length. To see the difference between those two scenarios, we are going to need to look at podcasts by their average episode duration.

We also wanted to explore how differing lengths can affect performance between podcasts. Because we are looking at data from the podcasts’ RSS feeds and not from our own Megaphone platform like in our previous posts, we do not have the download numbers for these podcasts. But we can use the number of Apple Podcasts ratings (ratings in the iPhone Podcast app and from iTunes) as a proxy for download numbers to show which podcasts are more successful than others. The idea is that the more times a particular podcast receives a rating, the more listeners have downloaded that podcast. Using the number of Apple Podcasts ratings as a measure of success, we can see that the most successful shows group around the 30–70 minute range. We can also see that serialized podcasts tend to group in the 15–50 minute range, while episodic shows have a bit more variance — for example, the vast majority of podcasts over 60 minutes are episodic talk shows. Despite this difference, both the most successful serialized and the most successful episodic shows are still in the same 30–70 minute range.

Now let’s look at how show lengths have changed over time. We did this by adding another metric to our data: what year each of the top shows actually launched. When we chart out the 549 podcasts, the first thing we see is just how quickly the podcast industry is growing. Notice the huge swarm of top Apple Podcasts shows that have launched in just the last year.

We also see more variance in episode length among the newer podcasts. While some podcasters continue to launch very long (90 minutes or more) shows, we’re seeing an explosion of shorter podcasts.

Grouping these podcasts by average length and release year shows that shorter podcasts have become much more common over the past five years. Conversely, there’s been a steady drop in the proportion of new podcasts that run longer than an hour.

There are likely a few reasons for this shift in the industry. For starters, there may be a limited pool of listeners willing to invest 90 minutes or more to a single episode when the same time could be spent with three or more shorter podcasts. Five years ago, there weren’t many podcasts filling the 10–30 minute niche. But as the industry has developed, more shows have moved into that portion of the market.

It’s also probably the case that, as we see more highly produced shows and more celebrity voices in podcasting, the cost per minute of making a new successful show has increased. Lastly, releasing more episodes by cutting them up and making them shorter, assuming the same number of listeners, would increase the overall number of downloads (consequently increasing the ad revenue).

Whatever length you choose to make your episodes, remember that you’re competing both with a new wave of short, tightly produced podcasts and a fair number of entrenched longer shows that have already earned their audience’s trust. A good piece of advice from Megaphone’s Andy Bowers, who’s been creating podcasts since 2005, is to start shorter than your first instinct tells you to. New listeners are more likely to give your show a try if it doesn’t eat up a huge chunk of their day, and they’ll let you know if you should make future episodes longer. There’s no greater compliment than a listener writing in to say, “I love your show, but it’s too short!”